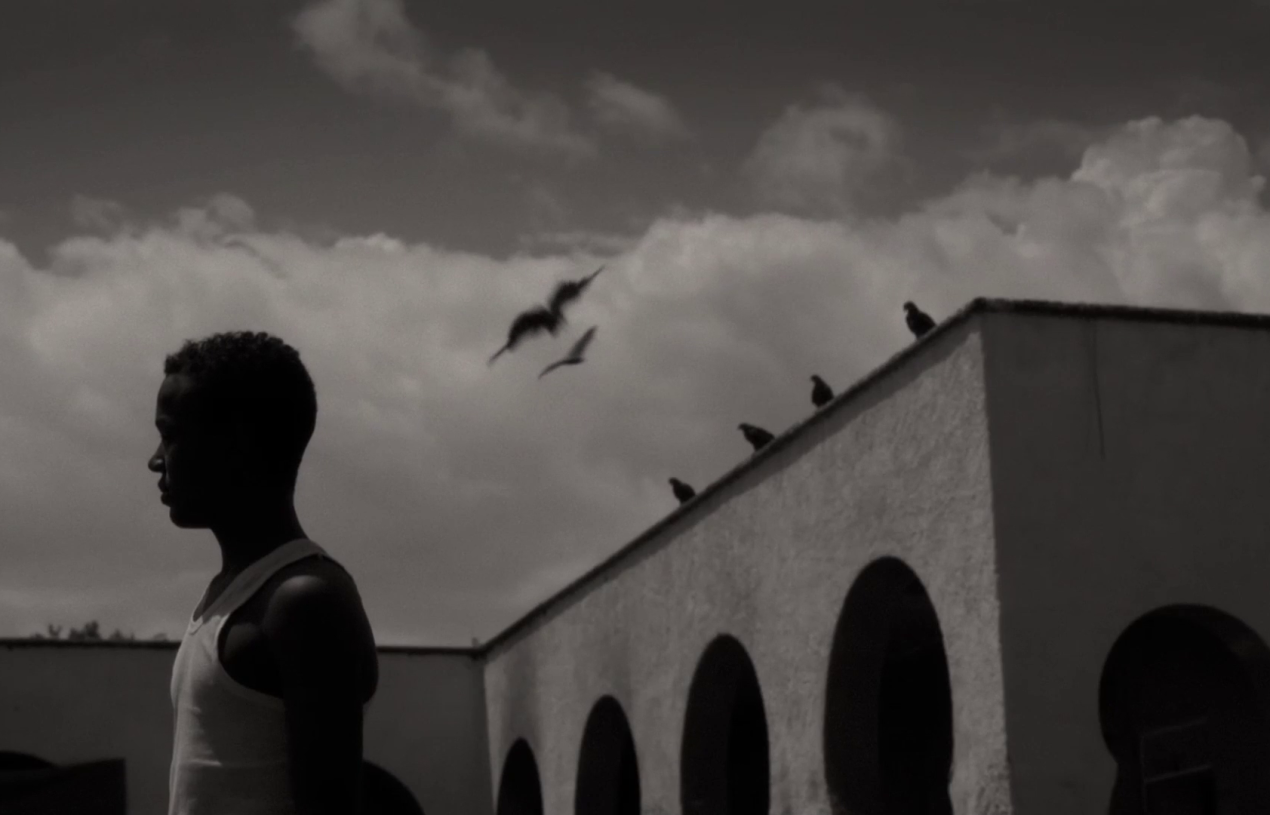 There is a dream at the centre of Jessica Beshir’s Faya Dayi, a dream that is both magical and cruel; a dream which carries us like the wind through memories and hopes, but which also keeps us grounded in the brutal reality of the here and now.

Ethiopia. Home to almost 120 million people. Lowlands, deserts, and mountain ranges. And there, in the mountains, we get to know the people who dream. There are dreams of leaving for Europe, dreams of a better life, away from the khat that is the country’s cash crop. Khat — a plant with stimulating effect, a plant that allows one to escape.

Everyone chews to get away. Their flesh is here, but their soul is gone.

Khat opens doors, doors to an alternative reality, where the soul travels within a magical world. It opens doors to work that may earn you a living. The most important door, however, is that of escape. Europe is another one, at the horizon, beyond the frontier with Egypt. It has a price, however. It has a high cost, in fact, in many ways. Unimaginable sums of money are necessary. What would be a monthly income for us, is often beyond reach for many Ethiopians who want to try their luck. Working in the khat industry could maybe, one day, give them enough money to undertake the journey towards a better life. But there are no guarantees. The worst could happen in the Mediterranean Sea, which has turned into a large graveyard for migrant souls.

There are other costs. Leaving your country is never easy, even if you have an ambiguous relationship to it. An elderly asks a young man whether a stepmother could ever give him as much love as his biological mother could. The young man responds in the negative. The country, your homeland, is a mother who nurtures you, a place where you have your roots which you cannot take with you. And then there is what Laurent Gaudé describes in his book Eldorado: “Aucune frontière ne vous laisse passer sereinement.”

Every border becomes a wound, bleeding through generations.

Every dream has its accompanying nightmare. Seeking a better life abroad, often in Europe, will mean eternal uprootedness. No stepmother in the world can make up for what you lose by leaving your mother.

But Faya Dayi is not a film about refugees, or nightmares. Even though it follows a young man who works here and there on a khat farm and who runs errands for the elderly to earn a bit of money (and who dreams to leave everything behind), the real subject is found at a border which isn’t geographical. It’s a border in the mind, announced by a rising smoke that acts as a passageway into another world. Over and over again we see hands picking small leaves from the slim branches that are delivered in small transparent bags.

We see young men working the plantation, the sun always above their head. Beshir’s beautiful black-and-white aesthetic draws a contrasting picture, a picture where light and darkness, hope and resignation always exist side by side. At times, darkness prevails, at others light takes over. The plantation, the slim plants function as a mediator, as a bridge. The plants give work but also cause impoverishment. They are a way out, but this way is dark and has no end. Because this is the key: khat, this tempting border crossing to a better world, is a trap.

The world we carved for ourselves is an empty and lonely hideout where no one can ever visit you, our own dark and lonely world. Wherever I turn, all I see is darkness. To my left, to my right, behind me, in front of me. Do you want to live in darkness?

A young man writes letters to his mother, a woman who tried her luck only to never return. She has become a ghost, a desire, a fixture in the man’s mind. He has to put up with his father, a khat chewer who has different personalities throughout the day. “I’m tired of everything. Tell me about your world, where you go,” he says to an elderly man who, too, is chewing the plant to escape into another world.

Keep walking, though there’s no place to get to.
Don’t try to see through the distances.
That’s not for human beings. Move within,
but don’t move the way fear makes you move.

A Sufi with a magnificent view of the spiritual surrounding him, surrounding us, but which is also inside us.

The people Beshir shows us are also Muslim Sufis. Sufism is spirituality. An other world is part of this world, of our world, the world we think is real and true. This, too, adds a layer to Beshir’s film: Sufi imams traditionally chewed khat in their search for eternity. What has happened to the Sufi’s spiritual journey?

Today, those dreams, those visions and desires, those fantasies — all of this goes up in smoke. There is no real escape, not in this land that oppresses and marginalises its own people. Not in a land that makes its mothers cry for their disappearing children. The response to this tragedy is Beshir’s Faya Dayi, which is a magnificent spiritual journey, a dream-like dance from the khat plantations to large hangars where the khat is processed, to the feelings and thoughts of those who find themselves stuck between a possible future dependent on khat, and a risky and expensive attempt at finding freedom elsewhere.

The border is tempting. Smoke is leading the way…