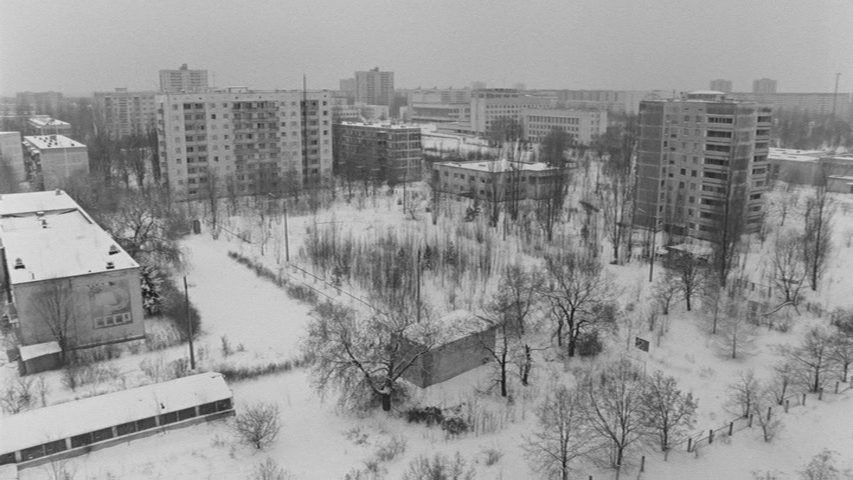 A woman is walking through a dead landscape. Nature has taken over what Man has built. It’s wilderness we see. “These wild apples grew after the accident. There weren’t apples here before,” she says while slightly turning towards us. She doesn’t stop. She keeps walking. Always on the move. She is a scientist, spending her day in a contaminated lab and checking radiation levels. She had worked in the city centre, she says. And at the nuclear power plant. Of her flat, nothing is left. She enters a rundown building that used to be her home. In one room, she finds a book on the ground that used to belong to her son. “It’s all radiated,” she says, and puts the book on top of the window sill.

It is an eerie but magnificent, haunting but beautiful end to a ghostly film. At the end of the 1990s, Nikolaus Geyrhalter explored “The Zone” around the Chernobyl nuclear power plant. It often feels like Andrei Tarkovsky’s Stalker, more modern perhaps, less philosophical, but just as important. The extensive ending, the woman walking through a wilderness which used to be her home, turns into a hypnotising journey through a place out of time. Pripyat is as timeless as Geyrhalter’s Homo Sapiens. Although it is anchored to the Chernobyl nuclear disaster, which occurred in 1986, it feels as though the film tells more than one story. The black-and-white shots of a rundown, deserted area speak of universal calamity.

Pripyat used to be a workers’ city. A city built from scratch, with a cinema, a stadium. Entertainment – that was important for those who worked at the nuclear power plant. And the city had it all. Geyrhalter introduces us to the now deserted landscape with long shots. His shots are memories, old photographs of things that have been. The deserted buildings become scars that have been left behind by a disaster, which disjointed time. It has blurred the line between past and present. Pripyat shows that both exist at the same time. Life and death – they’re always in one and the same frame. A broken-down electricity pole in an otherwise deserted landscape. A bird’s nest on top of the pole. A sign of life? Absence and presence. (In)Visibility.

“Well, we don’t call it ‘The Zone’,” an elderly couple tells us. The man confesses that he had been homesick after he and his family had been evacuated, so they returned to live in Pripyat, right in the centre of the contaminated zone that might remain lifeless for decades to come. “I can tell you, there’s no life here. There’s no on else, no neighbours,” he says.

What you see is what you believe. Geyrhalter sure shows us the dying city. Every day, a bit more of it is taken back by nature. Grass, fern, weed, trees. Despite several interviews, the film frames are drained of people. They’re drained of life. And yet. One security guard on the scrapyard for cars says that he got used to the danger. “You cannot see the radiation,” he says. But it is in every frame, an invisible presence that is really the core of the film. A hovering ghost from the past that makes what we see appear timeless. And so do those who have lost their lives in the disaster. They’re still there, invisible reminders of man’s self-destructive development in the name of science and progress. “He has never been found,” a foreman of the power plant’s Unit 3 says while standing in front of a memorial set up for one of the victims who died in Unit 4. Unit 4 – symbol of the worst nuclear destruction since WW II. An accident. An accident that should have been a reminder of the dangers of nuclear development. We didn’t listen. Fukushima was next.

“Even if I’m sent to prison for this. They can lock me up,” the woman scientist says when she speaks about helpers who had arrived from all over the Soviet Union and the world in the immediate aftermath of the disaster. She believes that many have since lost their lives. They needed experts, she says, not young man who didn’t even know what radiation was. She accuses the government of sending unknowing people intentionally to the disaster area.

There is anger. There is concern. One woman is still waiting to be evacuated. For six years. Six years. She has given up believing that someone would ever resettle her. You have to make do. “You have to live and you have to work,” an old woman at the doctor’s says. “But how are you supposed to live?” Geyrhalter shows us people who have been forgotten by the government. The present become the absent on a larger scale, in another dimension. Only a few years after the disaster, the Soviet Union collapsed. The responsibilities shifted. Those outside the zone continue their lives. Those inside are stuck in an atemporal bubble.

Pripyat is very much a precursor to Homo Sapiens. You cannot ignore the similarity between the two films. What he had started in Pripyat, namely the investigation of what mankind possibly leaves behind one day, Geyrhalter pushes a bit further in Homo Sapiens. There are no more men, no more interviews. Only empty frames, deserted buildings. An apocalyptic feeling which starts with Pripyat. Homo Sapiens feels like a sequel, and which, I might say, deserves another instalment. Geyrhalter is, next to Wang Bing, one of the most important documentary filmmakers working at the moment. Interestingly, the two directors from two different corners of the world share a lot, even simple frames that show up in both directors’ works.

There seems to be a silent conversation between the two, a conversation through film, a conversation that is so often absent in their films. Scarce, basic, casual. If communication exists, it’s a form of communication by those left behind, forgotten, those on the margins who are cut off from the rest of society. Whose livelihood has been destroyed and who make do with what they have. Pripyat is one of those powerful films that makes one aware of the many blind spots that exist around us, of people who, despite everything, simple keep living, defiant of all external threats and neglect. Film becomes a tool to acknowledge this, to take our hats off in face of their courage, and to let them know that not everyone has forgotten.

(Pripyat is part of the newly released DVD Box set of Geyrhalter’s films called Six Films By Nikolaus Geyrhalter. You can check the website of the distributor, Icarus, for more information. I can highly recommend getting the box set!)