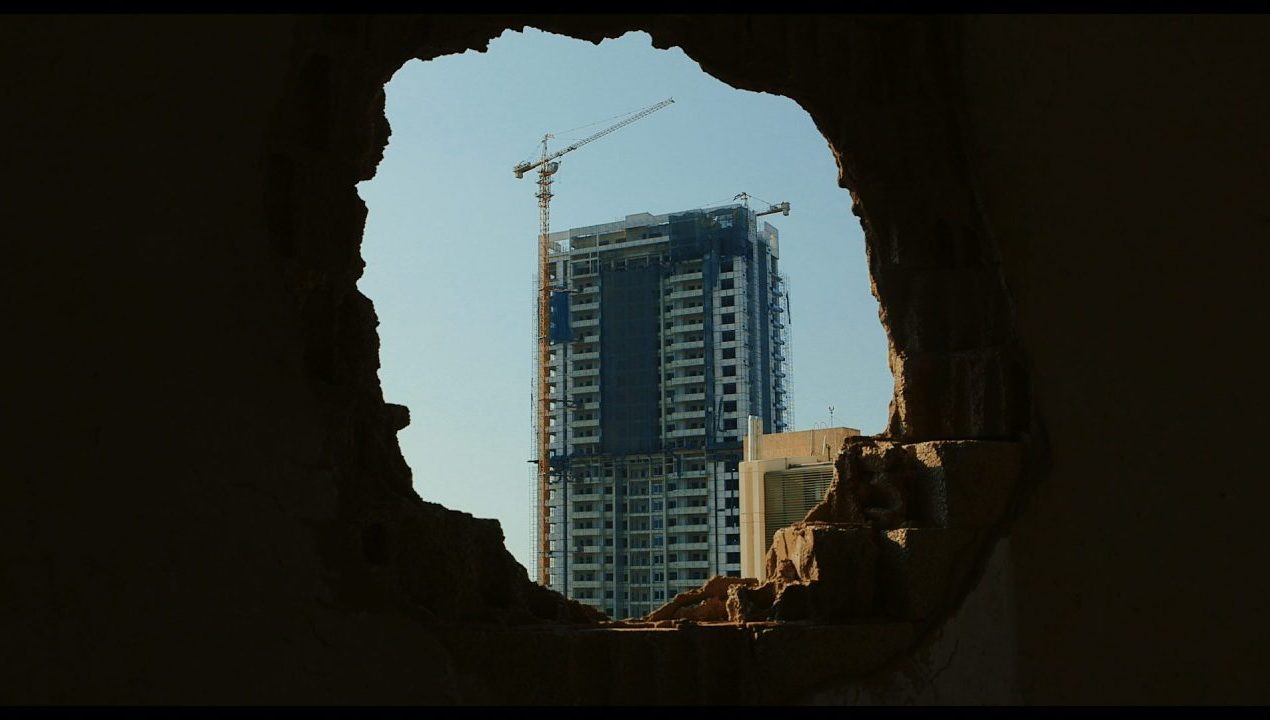 My father’s hand was the city of Beirut.

I came to Ziad Kalthoum’s Taste of Cement by accident and it’s one of those accidents that you’re grateful for. Not so long ago, I read a long article on the Guardian about our obsession with concrete. Concrete, stable, over-towering and yet destructive, is perhaps the symbol of our advanced modern societies. Kalthoum’s film is not only about this though. It’s a poetic journey in many ways; literary, cinematically, humanly.

I’m trying to remember my life before the war.

Ziad Kalthoum tells two stories. His film is set in Lebanon. The camera observes Syrian migrant workers who are employed on construction sites around Beirut. They’re rebuilding a country that has been ravaged by war; all the while war is destroying their own country. Syria, where war has been raging for eight years, is always in the background of the film. The country is for a long time an absent protagonist, the main protagonist even, and it’s in the fabric of each character, of each movement, each action. Syria is there.

But it’s crumbling. It’s being dismantled, destroyed. The director, from Homs, puts the country at the horizon. There is a feeling of longing, of desire, but also of anxiety. After a twelve-hour shift on the rooftops of Beirut’s new building complexes, the workers return to Syria. In their makeshift housings, beyond humane, they travel back home via their mobile phones. Social media allows them to follow the war and the ongoing destruction. It is here that Kalthoum merges the two locations of the film; one a war-torn country, the other in a mode of post-war reconstruction.

The sound of the sea is deafening, but the waves stand still.

Kalthoum guides the viewer through the use of a voice-over, through the use of a worker’s memories of his childhood, the times when his own father returned from work abroad, from Beirut, from the construction site. With a taste of cement. The man’s memories are vivid, almost palpable. We can imagine a young boy running towards his father, fascinated by those white hands that show the marks of hard labour. “Cement eats your skin, not just your soul,” the voice-over tells us. The food the father cooked upon his return had always tasted of cement, the young man remembers.

This taste, it is a bitter one. The film begins with breathtaking imagery. Each frame is aestheticised, photographic, marvellous. But the images contradict the voice-over. They contradict the hardships, the war at home. The second part of the film begins to make Syria, the absent protagonist of the film, visible, not only through pictures and videos on the workers’ mobile phones. The slow, almost peaceful movements of the cranes in Beirut are juxtaposed with gun turrets of tanks. The movements are the same, the purpose on opposite sides. Creation, destruction. Destruction, creation.

When your palm corrodes you stop counting the days. Time stops.

There is a special rhythm to the film. It is contemplative, observational, poetic, but the director disrupts this rhythm several times. Those disruptions, they function as shock moments and as a link to the images of destruction in Syria. The taste of cement is present not only in those who work abroad on construction sites. It is also present in those who are buried underneath the ruins of their houses, in those who dig for survivors.

Kalthoum’s rapid editing towards the end of the film evokes the traumatic shocks of war. The routine and repetitive work processes give way to footage of destruction and of death. It is as though the film comes full circle. It is as though it points to the senseless circle of construction-destruction, the sheer painful irony of Syrians helping to rebuild one country while their own is ravaged. Taste of Cement is a look at our own conflictual nature and one cannot help but keep a bitter aftertaste.