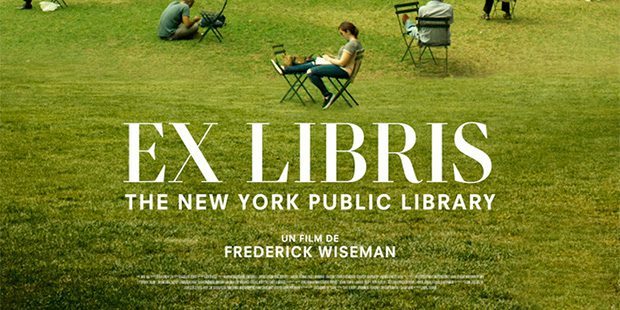 When I wrote about Frederick Wiseman’s Welfare not so very long ago, I did mention how difficult it was to classify Wiseman’s films as slow cinema. They are not slow in itself, but what makes it rather complex is the director’s in-depth observations that result in films that run for three or four hours. I should be careful and I know that I run the risk of equating length with slowness, which is not always the case. Nor is it a standard of Slow Cinema. We all know that directors such as Lav Diaz, who combines cinematic slowness and long duration, are rare. And yet, it seems impossible not to speak about Frederick Wiseman’s new film Ex Libris.

Ex Libris is the latest of Wiseman’s 40 odd films that explore, for the most part, American institutions and American society. As he explained again during the Q&A which followed the screening at the Théâtre National de la Bretagne in Rennes, these films become films only in the post-production. He tends not to prepare for his films. Instead he goes out and shoots, which, I believe, frees him from certain constraints. If you don’t know anything, you are bound to observe everything in order to learn how things work. He told us outright that he was at the NYPL only once in his life, and that was over 40 years ago. He went out without any knowledge but with the goal to find out about how this institution works. Now, at this point I feel the almost desperate need to mention that I have no respect for viewers, who believe that they know better, that they know how some directors work on set and the director doesn’t know what he himself/herself is doing. I listened to a Q&A with Béla Tarr once, after the screening of his last film The Turin Horse (2011) in Edinburgh. Some viewers took Tarr for a liar and pretended they knew what he really did or had in mind when he was on set. Some viewers tried the same with Wiseman on Sunday and I salute his inner peace! I’m sure it’s not always easy to stay calm in Q&As when the viewer thinks s/he’s king!

Wiseman’s new documentary is an almost three-and-a-half hour look at the New York Public Library. I expected a lot of scenes of people reading, researching, writing. I got almost nothing of it, because Wiseman focused on the many identities that libraries have nowadays, and perhaps must have in order to survive. The documentary’s title is a clever choice, allowing for several associations to pop up in your head once the film is running. Wiseman shows several different sites of the library, which is not at all connected to one place only. On the contrary, the New York Public Library has 87 branches and although Wiseman’s film is pretty long, it shows only a fraction of the work that is being done across those branches. And this work is impressive.

As one architect, who was amongst the finalist for redesigning one branch (or a centre? Memory fails me.) said, libraries are no longer a simple stockage for books as they used to be. Libraries are – and Wiseman shows this throughout his film – a community hub. It is a space for learning, in some ways like a school, and yet very different. People learn to read Braille; they visit workshops in which they learn about links between Marx and Lincoln; they attend public talks by authors who talk about their work (one subject I can remember dealt with Islam and slavery); they come into the library to dance, to look at rare objects in galleries/museums, to meet other people; they come to learn how to use a computer. The New York Public Library does it all, and more. Behind the scenes, Wiseman shows us how intensive the discussions are in the executive board about future goals, about how to remain relevant and justify the funding from the city they have asked for. What is it that they want to do next? What should their focus be? Is it Bestseller books, or rare research items? Is it primary education for children before they even go to school, or is it helping struggling teenagers?

Wiseman shows all of that. He records live sessions with artists and authors, but also official speeches by the director of the NYPL, or by the director of the Schomburg Center for Research in Black Culture. He records people at the help desk; students who work with the library’s picture collection; children experimenting with robots; or a poet who wonders “What is a man?”. The director very much shows the ex, places emphasis on it as if to bring home the idea that a library is no longer just a library in the original sense. Whenever he shows scenes of quietude and peacefulness, i.e. the very essence of a library (in my mind, using it as a research place), he cuts away quickly again. Wiseman doesn’t dwell for very long on the library as a harbour of quietude. Rather, he shows the buzzing nature of it, of what it has become. This is, to me, unfortunate, because he ignores the readers and researchers who spend hours in the library in order to progress in their work. It’s their place, it becomes their home for a period of time. At the same time, I might well be stuck in my head with this image of a library being a stockage of books, which, as Wiseman perfectly demonstrates, really isn’t the case.

Ex Libris is a film to be seen this year (or next!). It’s a through investigation of the ex and of the essence of a library in our time. Without being slow, it takes its time to look at the various aspects of the life of a library as institution, as social hub, as meeting place, as a business, as a concert place, as a school, as a museum, as a research hub… Wiseman shows the fascinating diversity of what’s going on in this “stockage place of books”. Rather than being a place of quietude, it is, in fact, a beehive where something happens all the time.