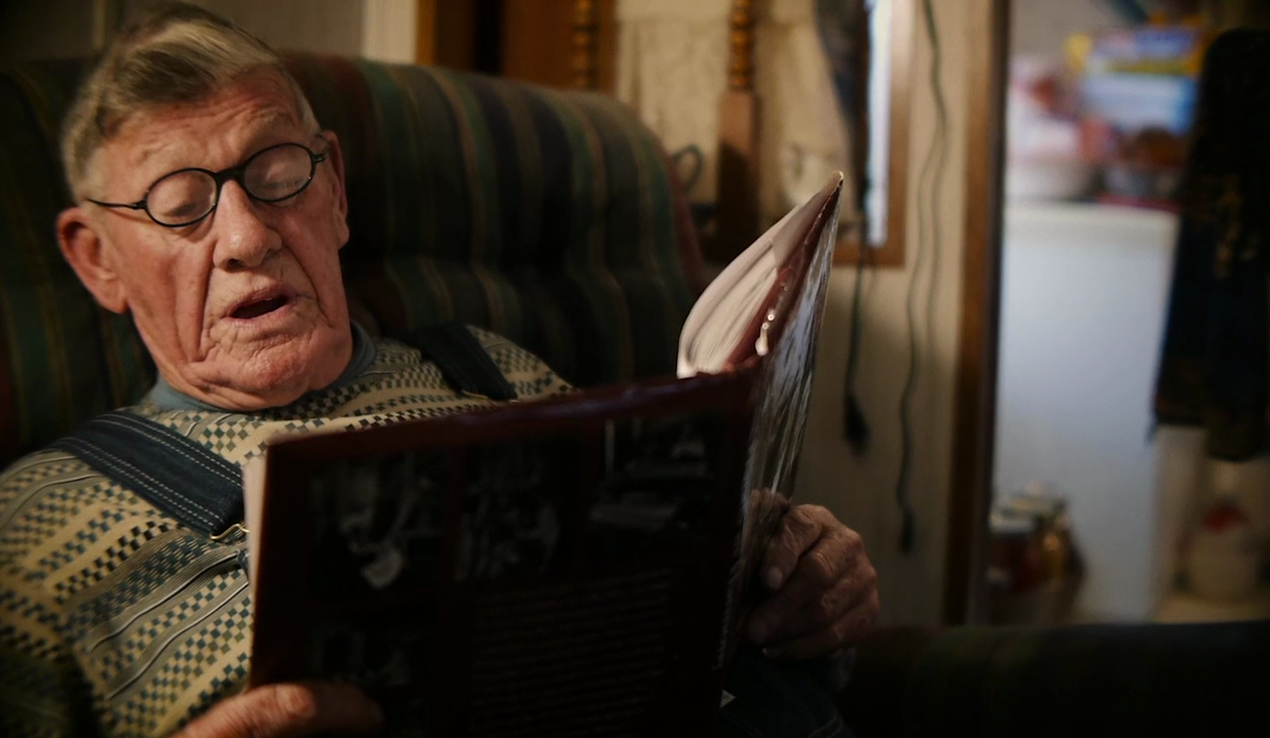 It’s banjo. There have been several slow films, whose subjects have become iconic over time. I believe that if you mention “the horse” to someone who knows Slow Cinema, s/he will most certainly think of Béla Tarr. The same goes for “the whale”. I have an immediate association with Tsai Ming-liang’s The Wayward Cloud if someone mentions “the melon”. Describing a film with the help of a single word does not necessarily reduce them to something limited. On the contrary. This one word starts a train of thoughts and memories regarding a specific film that, in fact, shows its richness. Alas, this doesn’t work with all films, but it sure does for Linefork by Vic Rawlings and Jeff Silva.

The film starts with a high angle shot of a freight train. The train takes a slight corner before it drives towards us, honking, thereby disrupting the silence, the quietude, that the shot initially suggested. A peaceful shot follows, a strong opposite to the previous shot: the blue skies reflect in water. The scene reminded me of Abbas Kiarostami’s Five, which I have reviewed on this blog not so very long ago. The sequence of shots, including one of a run-down mining structure, evokes not only something peaceful. There is a sense of death inherent in those scenes. Despite the presence of chirping birds in the far background, I associated the images I saw with absence. Perhaps it was the lack of characters. Perhaps it was the lack of freight in the train. Perhaps it was the lack of ducks on the lake. Even when the film proper started, I couldn’t shake off the feeling of absence that was dominating the film almost persistently with only a few exceptions.

Linefork tells the story of Lee Sexton, who lives with his wife Opal in Linefork, Kentucky. A retired miner, Lee now tills the land around his house, watches chat shows on television and, most importantly, teaches young people how to play banjo. There is a real discrepancy between his life at home and the directors’ shots of Lee playing banjo. The quietude at home, Lee’s slow movements and his perceived idleness, is suddenly interrupted by the entertaining, moving and rhythmic music of his playing the banjo. Lee encourages a young man of around 18 years, who learns the art from him. Then he begins to sing. Linefork is about two people: Lee as musician, and Lee as a houseman. The two personalities, it becomes clear in the film, are not necessarily incompatible. Instead, it allows the directors to create a calm film, which, at the same time, offers small explosions. Perhaps this isn’t the right word, and suggests too much.

Nevertheless, I do believe that in offering those juxtapositions, Rawlings and Silva bring something crucial to the fore, namely the idea that there is not one time, but several times. As the Chinese say, time is like a river. Water is not always running at the space speed. It is not always running into the same linear direction. There is much more to it. The term “fluidity” expresses exactly what the Chinese think of time. I believe that Linefork is a river that moves at different speeds and into different directions. It takes small turns, speeds up, then slows down again at another corner. Overall, it is right to say that there is always progression, both in this film and in time in general. But this progression is by far not as linear as we think or as we perceive it to be. Not all films show this progression of time as clearly as Linefork.

At one point, we are in Lee and Opal’s garden. We see them harvesting beans. The scenery is quiet. The two say a few words, but nature sounds largely prevail. It’s almost a still image. At another point, he watches telly, sitting in his comfortable chair without really reacting to what he sees. Yet the advertisements on telly as well as the chat show he watches stand in contrast to the time that is present in Lee’s living room: it is so much faster. If you cannot believe that there are different times, then those scenes (there are two or three of them) give you the clearest indication that what you think might not be entirely true. The difference of perceived time in this scene is utterly striking. It is like a hiccup in the otherwise so quiet film.

What highlights this feeling even more are the directors’ nature shots, which bracket the story of Lee and Opal from time to time. They function like bookmarks, a way to reintroduce calm after the storm. The nature shots sometimes have a painterly aesthetic to it, and highlight the observational style of the directors. But Rawlings and Silva are far from being mere observers. About halfway into the film, the supposedly neutral observation by a static camera introduces a twist. When looking through contracts, Lee shows one of the letters he has received to the person behind the camera, asking him/her to read it. An arm appears from behind the camera, introducing the presence of the filmmaker(s). Not much later, Lee tells one of his stories, this time about his dog having been run over once and he relocated his dislocated hip. He speaks directly to the filmmaker(s), making no secret out of their presence. There is thus this tension between perceived absence but actual presence of the filmmakers that hovers over the film, which needs to be negotiated.

Overall, Linefork is a quiet film. It’s a great example of slow film that, I believe, would work as a good introduction to the type of cinema if you’re not yet aware of it.