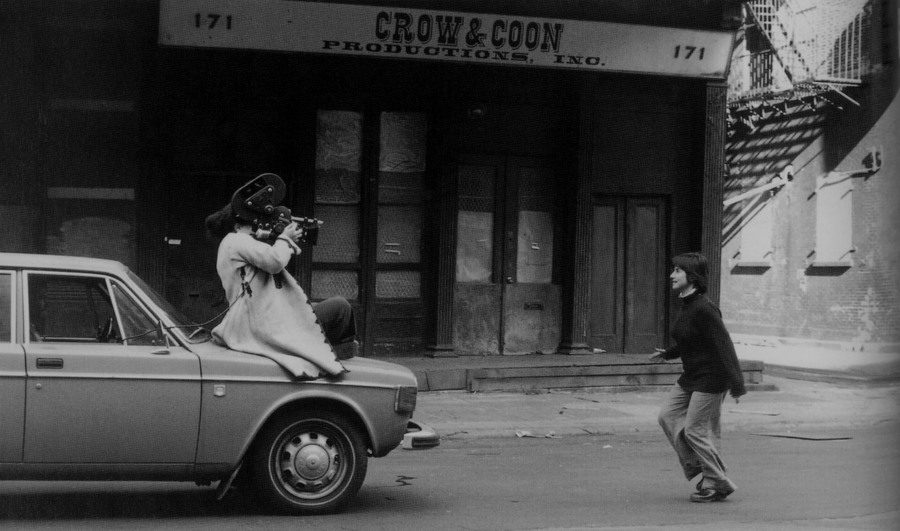 A small book at the bottom of a shelf that is overwhelmed with books on the big names of Hollywood; films, directors, actresses. There, somewhere in between those oversized books, I found the new book on Chantal Akerman, smaller than A5 in size, almost invisible. Written by Corinne Rondeau, this French-language book is the latest work on the Belgian director. Without being too analytical, Rondeau makes reading the book an experience just as watching a film by Akerman is an experience. Rondeau’s work is poetic in writing, often following a chain of thoughts as they come into her head. Her writing suggests continuous movement, circular movement at times, rather than chopped off pieces of thoughts that appear for no reason.

In her little book Chantal Akerman, Passer la nuit (2017), Rondeau suggests that it is futile to see Akerman’s work only in the context of her family’s traumatic past during the Second World War, the silence in the family that had affected her deeply, and her suicide in 2015. Even though, she argues, it is important – and she herself, in fact, returns over and over the aspect of silence as a result of history – it is not adequate, not productive, to consider Akerman’s oeuvre entirely as a result of that. A fair point, given that it is always futile to look at something from a single perspective. Rondeau sets an example, looking even at the small things. Her chapter headings are fascinating at the beginning, simply called “encore” (again) or “où” (where), chapters in which she brings to the fore the essence of Akerman’s work, I find.

There is plenty I would like to mention, but I will point to only a few arguments Rondeau makes, and leave it up to my French-speaking readers to get their hands on the book.

The first argument, which I thoroughly liked, is Rondeau’s explicit view of Akerman working in the context of the words “nothing”, “blank”, and “gap”. These terms appear over and over in Akerman’s films, as visual demonstrations rather than spoken words. Indeed, I find that these terms are particularly prominent in the films I’m interested in: Là bas, D’Est, No Home Movie. Although Rondeau refuses to read those films exclusively in the context of a traumatic family history, these three films are important in the context of memory, memory lapses, the silencing and suppression of traumatic events. It is impossible not to read them in this context, perhaps in the context of the second and third generation attempting to dig up the past that has formed them, affected them in the way they think, feel and behave. Perhaps, this way of thinking, my thinking, makes me feel so strongly about Rondeau’s description of Akerman’s films: “une nuit qui tombe peu à peu”, a slow nightfall. With No Home Movie, night has fallen.

Rondeau argues that it is obstacles that really help us to find a way, and it is silence that help us to find words. Akerman, according to her, makes use of this logic, and uses a kind of aesthetic that she describes as “suspense in absentia”. Tension is there, but it’s not overt. It’s the main ingredient of her films without putting it on the films’ sleeves, so to speak. Tension is present and absent, just like trauma, which disrupts time and space. This “suspense in absentia” is not only characteristic of Akerman’s work, but Rondeau has unwillingly characterised a large number of slow or contemplative films that use this aesthetics. I described it, though in other words, in my work on Lav Diaz. Béla Tarr’s films centre around this absent-present tension as well as more recent works. I’m thinking in particular of the works by Scott Barley and Enzo Cillo, whose videos make this covert tension palpable.

While reading the book, I came across several instances which contradict Rondeau’s initial claim that it was futile to see Akerman’s work exclusively in the context of trauma. And yet, she herself writes about it without mentioning the term. It is more by describing Akerman’s aesthetics that she gets to the bottom of the nature of trauma, which she, at the beginning of the book, so vehemently rejected as the sole centre of the director’s oeuvre. She mentions another characteristic of Akerman’s films: “on s’approche en s’éloignant”. We approach something by distancing ourselves. This is very much an extension of her notes about silence as a necessity to find words, and obstacles as a necessity to find a way. One is important in order to reach the other. The idea of approach through distance reminded me strongly, again, of the nature of trauma. You dig in your memories to find something. While speaking about it, you come closer and closer to the actual painful event, but you often bounce back, you distance yourself, precisely because it causes you pain. Approach versus distance, distance versus approach.

“Où vont les images?” Where do the images go? According to Rondeau, Akerman’s oeuvre centres around this very question. Why do all images move towards the night? Or “How can you remember something that you yourself haven’t experienced?” as Akerman formulated it. Rondeau identifies the circle as one of several main elements that appear over and over again in Akerman’s work, which to me, once more, is the perfect symbol of how the director deals with the effects of her family’s traumatic history. As much as Rondeau would like to disconnect one from the other, it is impossible to do so. This is the one thing that I did not like about the book; the forced attempt of disconnecting the symbols Rondeau identifies in Akerman’s work from the nature of trauma, which is so dominant in the director’s films.

Nevertheless, Rondeau’s book adds a lot of good stuff to existing writings on Akerman. The way it is written – in a fluid, poetic style – makes it a pleasure to read. The book takes you on a journey and makes you hungry, I find, to see more of Akerman’s films. I haven’t seen her complete oeuvre yet, but am very much aiming for doing exactly that!