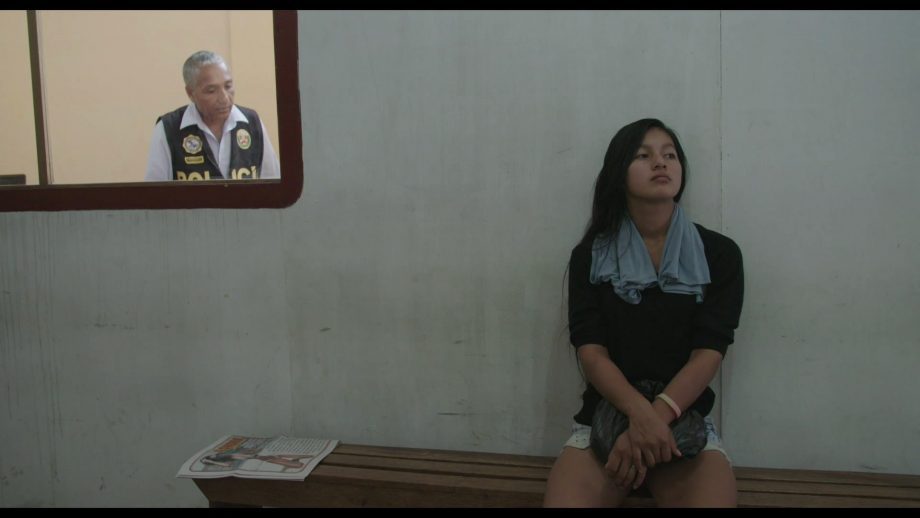 Since the Industrial Revolution, children have been massively exploited for work. Even though nation states regulated child labour, there is still a lot of work to do in order to safeguard them. What seems to be particularly difficult nowadays is the prevention of child prostitution. Teenagers without real roots anywhere slip into the hands of men and women, who try to profit from them, who lull them into their vicious circles with the promise of money and freedom. This “business” often happens in the dark, away from the public spotlight, and it is of major concern in Latin American countries. By the name of Tania made me think a lot, it is not a straightforward documentary, or a straightforward fiction film. Tania walks a path between these two.

To survive, I have erased myself. Time doesn’t matter.

Time doesn’t matter. Nor does a human being in a circle of prostitution. This erasure Tania, the young woman, speaks of is at the heart of the film. What matters is not visible, it’s in the off. Mary Jimenez and Bénédicte Liénard create a haunting absence throughout the film, with a lingering camera that tempts us, but that also refuses to let us go where we would like to go, that refuses to see us what we would like to see. In one scene, the camera takes us to the edge of a lush jungle. The green is marvellous, the sound eerie. We see the entrance to a jungle, lined by trees. There is a desire to walk further, to continue this walk and see what is on the other side. But the directors cut. They cut us off and leave us with an unfulfilled desire.

This is the point. There is an unfulfilled desire in Tania, too: the desire to be the young woman she should be, carefree, light, free. Free in all respects. Yet, she is cut off from this desire and taken to an underground world where the idea of freedom is connected to earning money. Tania had a difficult childhood, moving from family to family before she settled living with her grandmother. She has been taught to show strength. Crying wasn’t a way to express sorrow. It equalled weakness. We see Tania in a bus, on a boat, on a journey to an unknown place, unknown even to her.

She offers me a job, but far away. What do I have to do? Serve drinks and dance.

On a boat, the police is checking ID cards. It’s the trafficking police on the search for minors travelling alone. One 15-year-old has to leave the boat. She is considered too young to travel. The framings are tight. We are in between hammocks. Even though the boat is open and we can see the wind blowing in people’s hair, there is a sense of suffocation underlying those scenes. It is almost an atmosphere of suspicion. Once you realise that the police checks ID cards, you begin to worry about the children on board the boat. Are they travelling with their parents? Are they travelling with their “uncle”, their “aunt” who sell them to men in the city? What is going on in everyone’s mind?

I couldn’t help making a connection between Tania and Wang Bing’s Bitter Money with a pinch of Amat Escalante’s Esclava. Wang Bing’s film focuses on young people, often barely 18, or officially not 18 at all, who travel to the city in order to work. They face exploitation and conditions that tie them to their place of work. There is no freedom anymore. There is no life. They become part of an exploitative cycle of capitalist work. Esclava is about forced prostitution, a brutal short film that shows what Jimenez and Liénard don’t show.

She takes my ID card and throws it into the river. ‘Now you’re nothing’, she says.

Nothing. This is precisely the subject of the film. It is not so much about prostitution, albeit it might look like this at first. But Jimenez and Liénard, in their aesthetics, in their choice of storytelling, focus on what isn’t, on what is no longer, on what has been lost, on what cannot be reached. After fifty minutes, Tania tells us about the fines she incurs for not having a drink with customers, for waking up late. She says that her debts keeps growing, even though she works every day. Again, nothing – growing debt, no way out.

As well as the loss of dignity.

He raped me because I was a rebel.

Jimenez and Liénard’s film goes deep, travelling into the wound that is sexual exploitation. It’s a traumatic wound, which shows in the non-chronological progression of the narrative. The shifts between past and present, without warning, without explanation, are brutal. Even more brutal are the shifts between the two different pasts to which Tania returns whenever she remembers a little more. Traumatic confusion, for Tania and for us. The poetic feeling to the film is misleading. It’s a bubble, a cover, a lie to make you feel comfortable. But the truth is that the directors take you into the dark, a little deeper with every scene.

The different slowness in Evolution of a Filipino Family