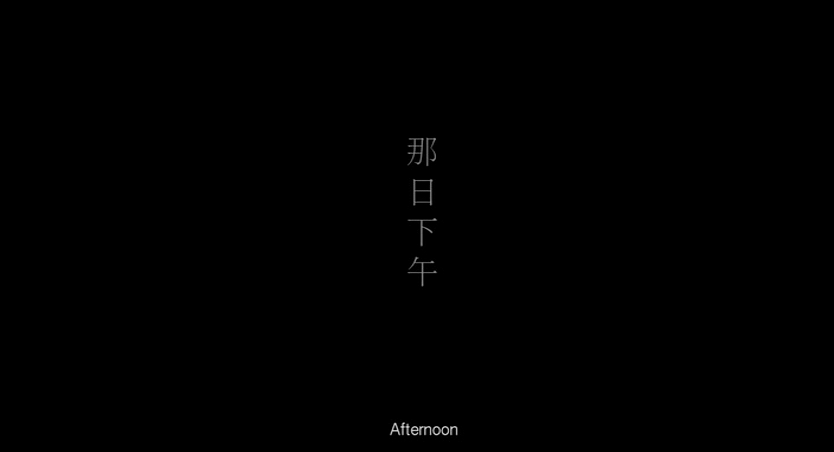 Does this conversation have to be so miserable? Tsai Ming-liang asks. His two-hour long conversation with his fetish actor Lee Kang-sheng, Afternoon, will perhaps remain one of the least known of the director’s works. First of all, because it didn’t have a wide distribution, which is a true shame. At the same time, it is not an ideal cinema film. It is more something for a gallery, or even for your living room. I wondered what I could write about it, too, because it’s not easy to say something about the film.

Why is this? I think it is the result of Afternoon‘s nature, the film being a private, intimate conversation between a director and his actor. Tsai and Lee are an icon of world cinema. One cannot think of one without thinking of the other. There have always been questions as to how those two work together, how they found one another, what made them stick together over such a long time. Afternoon gives answers to all of those questions. And it gives answers to questions we may not even have asked yet.

There is only one frame and one cut. I’m not sure why the cut was made. I assume a technical problem. But it’s more important to think of the one and only frame we see throughout the over two hours running time. The camera is positioned higher than eye level. It’s a medium long shot. We see two walls of a house, two windows, and Tsai and Lee sitting in their respective chairs with one wall behind them. Outside, through the windows, one can see lush green, a vast valley and there is nothing but the wind on the soundtrack (except the voices). The setting is peaceful and yet something is crumbling. The walls are, for sure. But there is more.

Starting the conversation seems to be difficult. Tsai has troubles explaining why he wanted this conversation. He is reduced to tears at times, laughs at others. It’s a difficult beginning for the viewer, too. When Tsai speaks about his premonition that he will die soon, when he speaks about the memories of his grandfather who struggled with dementia – the image of his grandfather sweeping the streets is particularly painful – when he speaks about the suffering he went through before and during the shoot of Stray Dogs, there was a point I felt unsure about continuing to listen. Was it perhaps too private? Was it perhaps not meant for me? Of course, the latter question isn’t the right one to pose because if Tsai hadn’t wanted people to hear all his thoughts and feelings, he wouldn’t have made the film.

And yet, it felt uncomfortable at times and reminded me a lot of Chantal Akerman’s No Home Movie. The two films are radically different, but they enter a private, very intimate world, which can be difficult for the viewer to navigate.

I just feel like expressing my gratitude towards you.

Afternoon is almost one-sided. The way we know Lee from Tsai’s films is very much the way he is in real life. He is quiet, withdrawn, shows little desire. Over the course of the film, we learn that his film personnages are his true self (minus the sexual orientation). Watching him as a conversation partner is fascinating, although he isn’t doing or saying much. It’s more about his body language and the few sentences he does say (“You should leave the house more often.”). It is even more fascinating to see him outside the world Tsai has over the last twenty years created for him, a world in which Lee can be himself, in which he can develop with ease. And one cannot deny that with every film, Lee became better and better. I found Stray Dogs to be the absolute pinnacle of his acting career. Both Tsai and Lee have, consciously and unconsciously, helped one another to get the best out of one another, and together they have achieved this magnificent collection of films that we can now see.

In effect, Afternoon is not just a two-hour long conversation between director and actor. It is an hommage to Lee. It is also a demonstration of the care Tsai has for Lee, admittedly, in part, to an almost obsessional extent. I will never forget this scene in What Time Is It There in which Lee sits in a cinema with a clock in his arms. There is so much pain in this image, there is grief and longing. As we learn in Afternoon, the film was an attempt by Tsai to help Lee overcome the grief for his father, who had died a couple of months earlier. Lee was, according to Tsai, miserable and he wanted to help, so he made a film, which allowed Lee to use it as a form of therapy, to work through his grief and his loss.

What one realises throughout Afternoon is that each of Tsai’s films has an even more personal and tragic background than one can somewhat imagine when one watches the films. As Tsai himself says, he has found in Lee his alter ego through which he could find his inner world. If one believes Lee, Tsai has a personality that is radically different from his films, but filmmaking allows him to discover another side to him. And after twenty years of close collaboration, of exploring, of discovering, Tsai feels as though “this life is almost complete.”

I can stop making films now. I am happy to just film you walking.

Day 20 – Interview with the Earth (Pereda)