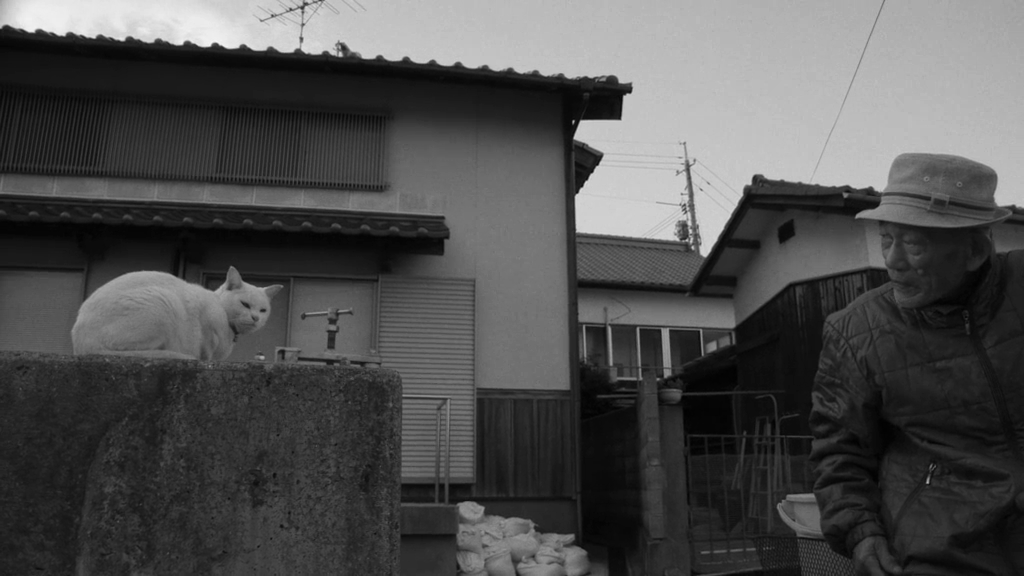 How can we understand slow films? What do they show, what do they tell us? At some point during my (previously academic) research, I came to the conclusion that every slow film deals with death. It does not necessarily involve the death of a person. In fact, I think few slow films deal with actual death (my memory could trick me tho). I speak of death in a larger sense, death as in loss, as something that comes to an end and that is mourned. It can be a life-long job in the metal industry (Wang Bing’s West of the Tracks); about the loss of one’s home (Yulene Olaizola’s Fogo) or even about the end of an indelible link between a person and civilisation, as we can see in Ben Rivers’ Two Years at Sea.

Watching Inland Sea by Kazuhiro Soda gave me the same sense of impending loss, of death which is slowly taking over. It feels as though each scene brings us closer towards an end, which isn’t clearly defined. But we can feel that it’s there and that we’re walking towards it. We walk with a woman, whose age we don’t know. She could well be in her late eighties. She is a curious character, an accidental focus for Kazuhiro Soda, who came to Ushimado, or, rather, who returned to Ushimado after he had shot Oyster Factory there. It is difficult to ignore that something has broken in Ushimado.

Inland Sea is Soda’s seventh “observational film”, as he calls his work. Observational films, not documentaries. Soda is present. Soda steers, asks questions, doesn’t hide his presence in the frames. We can hear him, we can see his shadow. Each frame feels like the result of a search for something. They feel improvised, they feel spontaneous. And intimate. In Inland Sea, Soda creates an intimacy that is rare in documentaries. Wang Bing is someone who comes to mind, someone who gets involved, implicated, who is not only an observer, but a participant. Of course, the word ‘participant’ poses the question as to the objectivity of the film. And I believe this is where Soda’s description “observational film” comes in. Documentaries are traditionally considered to be objective observations, albeit the angle and the editing make this pursuit of objectivity redundant. There is only so much objectivity you can achieve with art, any form of art, any medium.

The term ‘film’ doesn’t have the same expectations. A film can be anything and, above all, it can be subjective. The term is free from constraints and allows the director to turn his/her film into whatever s/he wants it to be. Films are free. Documentaries are not. And so we can see Soda’s wife interacting with those people her husband films. We can hear Soda’s own interaction with the village’s inhabitants. We ourselves get closer to Kumi-san, the woman mentioned above, and to Wai-chan, a fisherman who, despite his advanced age of 86 years, still heads out to catch fish.

Kumi-san and Wai-chan are the essence of Soda’s film. Wai-chan takes us to the sea. He laments the rising costs of fishing nets and the falling income from his fish sales. Wai-chan has seen the changes, drastic and brutal, which the sophisticated fishing industry brought with it. A small boat, fishing nets fixed by hand over years, over decades – and the traditional journey to a hangar where the fishmongers decide about the sales prices and about how much money the fishermen will receive: all this has been part and parcel of Wai-chan’s life. When Soda follows him into the hangar where the quality and the financial value of his catch are evaluated, the story is not so much about Wai-chan himself anymore. Wai-chan’s microcosm opens up to show us the larger picture.

In a series of scenes, we learn that the issue is not only the large fishing industry, which empties the sea in order to reach maximum profit. There is talk of climate change, of its being too warm now to catch certain fish. There is talk of less fish overall, which inevitably puts the work of fishermen like Wai-chan and of small, independent fishmongers at risk. Ushimado is a fishing village, but what future does it have if there is not enough fish? I find it difficult to believe that the village could carve out a different niche for itself. Soda’s scenes give rise to worry, not to optimism.

Kumi-san became a particularly important character in Soda’s film. “I don’t know where I come from,” she says. Not knowing where you are from can break you, it can wreck havoc in your life because you don’t know who you are. No roots, no identity. As someone who has spent the last two years looking into her roots, I know how much it helps to learn where you come from. It is such an essential part of yourself, which you cannot (and should not) live without. Kumi-san was adopted at the age of four. She lived in a foster family throughout her childhood and her teens. This revelation, which comes out of the blue, creates an intimacy between the viewer and Kumi-san, which isn’t present between us and Wai-chan. There is something different about our relationship to the woman who wanders around the harbour every day.

She seems excited and shy at the same time. One can feel her long-lasting loneliness, which makes her talk a lot now. It feels like she was just waiting for this opportunity. At the same time, she gives us a sense of pride over the village. “You should film this,” she says. “You should talk to him.” There seems to be a lot to see, a lot to say, and yet the film feels quiet. And because of its respectful quietness, it feels deeply human. Soda follows a woman to the cemetery which sits on top of a hill. She is looking after the graves of her ancestors, whom she never met. Being with her in this sacrosanct place is a strange feeling and yet consequential of everything we have seen previously in the film.

Just as consequential as Kumi-san’s increasingly open talk about her life. There is a story about her son, who was taken away by the social services. It’s not clear whether or not she tells the truth, whether what she described really happened. She seems to jump in time, cause and effect don’t clearly add up. But most important to me was the realisation that there was an entire life of hardship in front of my eyes. And there was something else: fragility, ageing, the gradual loss of memory. Ushimado becomes the people. The people become Ushimada.

The fate is the same for both.