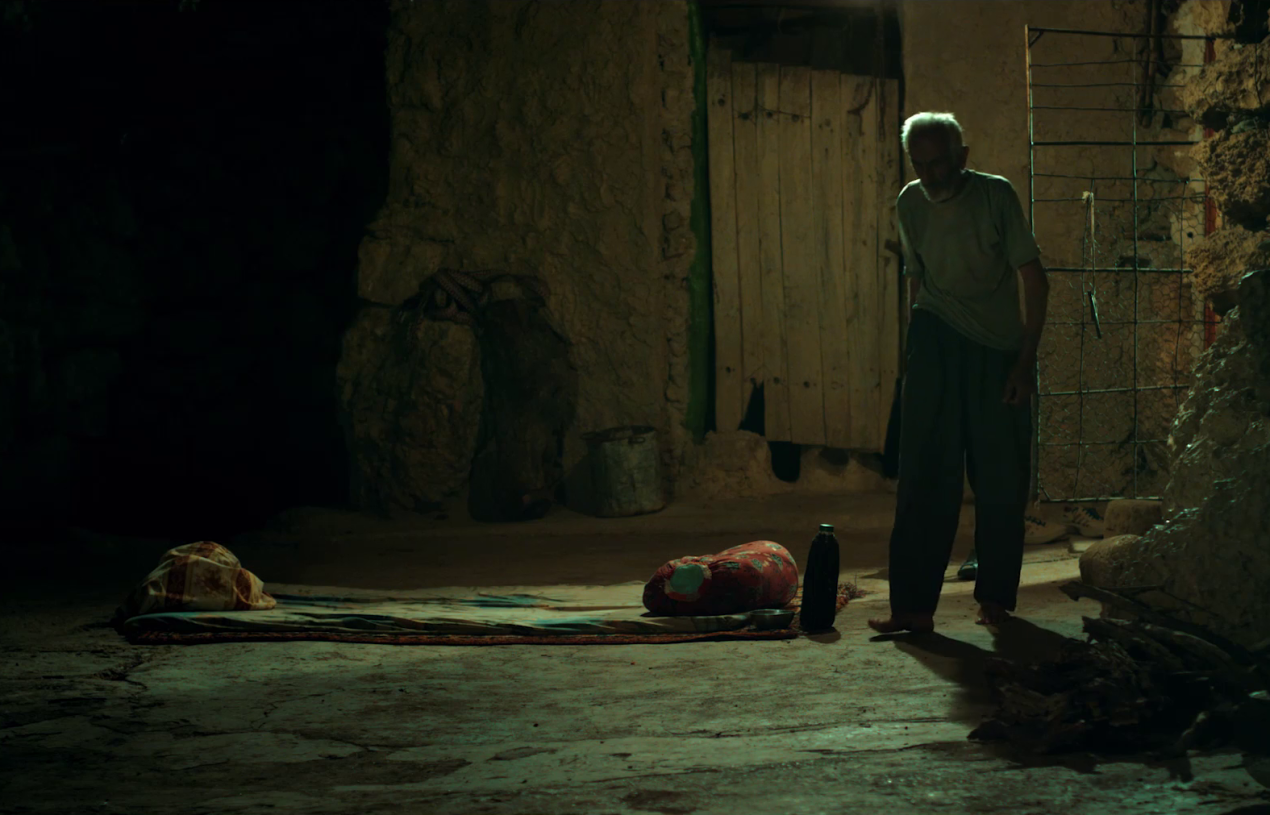 What should I do? Should I go or not go?

An old man mumbles these words into his beard. With a slight hunchback and visibly weakened by age and the life he had to live, the man walks almost in a circle inside his house. Maybe this could help him find an answer to a question he poses himself day and night, it seems. Where the man should or should not go — an open question, which Iranian filmmaker Hadi Mohaghegh puts in front of us, while taking his time to reveal what the man is actually reflecting on.

At nightfall, the man leaves his house, as he does every evening, as we will see, and shouts a name from the hill top.

The name becomes an echo every time it is uttered. It echoes in between empty houses and makes its way across the many hilltops, which we can see.

Mohaghegh’s Iro has the international title Here, but where is this “here”? On a hilltop, along rocky paths and green fields where the man wanders around searching for something. The opening shot — the man dwarfed by the absolute grandeur of a vast green field — puts everything we will see throughout the 80 minutes running time into perspective: a microcosm, a minuscule story that is happening, as it does so often, but without a solution, without a response because in the grand scale of things, the man’s story doesn’t mean anything.

But here is the thing: directors like Mohaghegh allow those microcosms to become macrocosms in their films. A small story from the middle of nowhere takes centre stage, and the response which the old man is waiting for, may not come from the people or the environment he wished for, but from us, from our inner response, our reactions to the man’s struggle.

Why do they want to kill my son?

With a small makeshift ladder, the man climbs a hill to collect some honey. Slow moving, shaking limbs contrast starkly with the fast buzzing bees, which he sets off by using a pan and a spoon to scrape off the honey from the bee hive. Back at home, he puts the honey into a small pot. It almost looks like an “empty” action, something he does to fill his time, more so than a necessary action for survival. It keeps him busy, while ruminating in his head, while trying to come to terms with his son’s death sentence. Every day, he shouts his son’s name into the landscape that just doesn’t respond to his calls.

What should I do with Sohbra’s son? Where in the world have you seen that a mother denies her child?

And all of a sudden, we begin to realise the large and deep incision that has occurred in the man’s normal, probably uneventful life. It is upended not only by his son’s death sentence (the reasons of which we’re never being told), but also by having to look after his grandson.

A middle-aged man walks along a road, a young boy of perhaps three or four years old trodding behind him. The man doesn’t wait for the child to catch up with him. He walks up the street and drops a plastic bag on the road. Then he turns around and returns on the same path he has just walked on, passes by the child and disappears at the horizon. The little boy continues to advance until the old man appears and walks towards him.

There it is: innocence. An innocent child, and an innocent old man — both caught up in events that they are not responsible for, but which will have grave consequences on their lives. It’s a moving image, seeing the old man kneeling to hug the little boy, who probably doesn’t fully realise what’s happening. The boy doesn’t have a past, just like his grandfather. The two were thrown into the present and have to swim towards the future, an unsettling future, especially for the boy.

What is to become of him? The old man struggles to look after the boy, but he tries everything. He even searches for his old telly. Maybe the telly could allow the boy some entertainment. But there is nothing, only a missing signal, an almost orange screen.

His friend Azizkhan is nowhere to be found. He visits his house twice, to no avail. Only silence and emptiness respond to his questions and fears.

To whom could I go? To whom could I pour my heart out? I want to cry, but I can’t. It seems night everywhere. No matter how much I run, I get nowhere.

At night, the boy sleeps wrapped up in a blanket, an image that is almost like a needle in your heart. The majority of time, Mohaghegh’s Iro follows the old man. We could almost be tricked into thinking that it is he who the film is about. Yet when the little boy arrives at the old man’s house, we realise that the real focus of the film is somewhere else. It is the boy who becomes the lead of the film. He doesn’t say anything. His silent and innocent presence, however, turn him into a majestic figure of tragic dimensions.

When the old man learns that his son would be hung the next morning, he decides to go see his son for the last time. After the execution. In a body bag. The brutal and cold end of a life, the life of a son and of a father. Mohaghegh’s approach to this last meeting of a father and his son is humble, his camera takes a distance to allow for privacy in the most private moment of someone’s life, namely death.

How will the story continue? When Iro came to an end, I felt a big knot in my stomach. I didn’t feel like letting the old man and his grandson alone. I didn’t feel like taking my leave and letting them struggle. I didn’t want the boy to be completely alone after the death of his grandfather. And yet, I had to. In my book Human Condition(s), I have a section or two on the effects of migration on children, on their being left to their own devices (we can see this most clearly in Wang Bing’s Three Sisters). But Iro shows another dimension of the suffering of the next generation. Just how many children in the world are left to their own devices because the harsh world of survival swallows their parents?