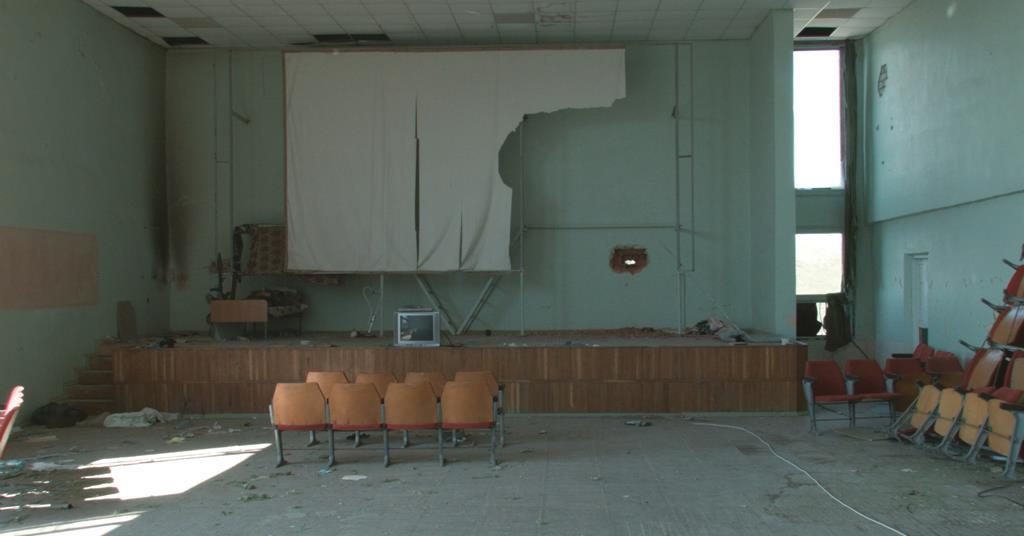 When Russia invaded Ukraine on February 24, a lot of questions were running around in my head. Some questions were existential, they were linked to what if? They were linked to the fear of a wider war, a World War, or even a nuclear war. Those questions haven’t completely disappeared yet, but they have become less present. Perhaps a sign that one gets used to everything. The reason I haven’t written a review for such a long time is also connected to the war. I was incapable of watching films. It was the last thing I wanted to do with the tense atmosphere around me. I also fell into a deep depression which made thinking about cinema impossible. Another reason was a question that kept haunting me and that remains in the back of my head: why am I doing this? Why am I writing about films while people live in fear, while they suffer and die, and while, it cannot be ignored, we face the prospect of a World War? Is it worth it? Is it the right thing to do right now? I still haven’t resolved this issue. I still haven’t found answers, but perhaps I’m going to find them in my writing.

We’re all guilty of not listening. We’re all guilty of not wanting to see. Kvedaravicius’s Mariupolis only received the attention it deserves once the focus of the Russian-Ukraine war shifted to the city and once the director died. On April 2, his death made the news in the film world. Born in Lithuania, he dedicated his work telling stories from conflict areas. He was in Mariupol when Russian-backed forced kidnapped and executed him. He had worked on another documentary about the city.

It would have been a sequel to Mariupolis, evidence of the West’s ignorance and neglect. What had been at the horizon in Mariupolis, what had been coming nearer and nearer, has today become reality — despite the warnings, despite the cries for help. Only the Ukrainians really understood what they were up against.

Mariupolis is a quiet documentary. It’s contemplative, quite literally contemplating life with death at the horizon. It had started in 2014 with the War in Donbas, when separatists, backed by Russia, sought to claim the region for themselves. We have seen this before. Georgia, Moldova, Armenia, Azerbaijan — over many years, Putin has moved his pawns across the region. Donbas was only one of many. But life continued. Two years after the war started, people in Mariupol were going about their daily lives. There is a shoemaker, a fisherman, a theatre group, soldiers. There is a child playing with her soft toy tiger, and filmmakers and journalists who walk through the ruins of a holiday centre for children after a Russian-backed attack.

Kvedaravicius simply observes, and the quietude that alters with the sounds of artillery at night is deeply unsettling. Perhaps the film has a much stronger force today, as the images of bombed-out flats, hospitals, maternities, schools, and the famous theatre are circling in the mind of today’s viewers. Mariupolis becomes the starting point for us continuing the film, for enhancing the images Kvedaravicius gives us.

When a group of people dance on a theatre stage in preparation for a show, a feeling of discomfort appears in your stomach. As it does when a little girl plays with her toy, or when a teenage daughter tells her dad that their parrot was losing his feathers. Where does normality stop and war begin? Is there normality in war?

It is perhaps at war when people notice most clearly the different rhythms of time and the cohabitation of the ordinary and the extraordinary. It is where everything happens as if in a shrunk universe. Kvedaravicius’s patient eye allows for this universe to show itself and one cannot help think that the film has, today, a completely different atmosphere to it. When the film was shown back in 2016, when the screen went black after the ninety minutes running time, there was some hope that things would quieten down. Maybe it was only us in the West, who had hopes for peace, while the people in Kvedaravicius’s film were already fully aware that, given some time, the war would take on a very different dimension.

Mariupolis is a document of a bizarre space of suspended time. There is war, but also not quite yet. The people go about their day-to-day activities. Seeing the film today, one cannot help but wonder who survived, who was killed. Is anyone still alive? Where did they seek shelter? Could at least some of them leave the city through a humanitarian corridor or have their bodies been found in one of the mass graves that are visible from the sky?

With Mariupolis, Kvedaravicius left us a visual testimony of the resilience of a people. It shows the very beginning of the tragedy of a city that would come to stand for Putin’s crimes, just like Grozny in the late 1990s and Aleppo in the 2010s. It also serves as a reminder that Putin, first as prime minister and then as president, continues to leave behind him a trail of blood, violence and destruction with total impunity. For how much longer are we willing to watch this and mumble, “Never Again”?

Day 20 – Interview with the Earth (Pereda)