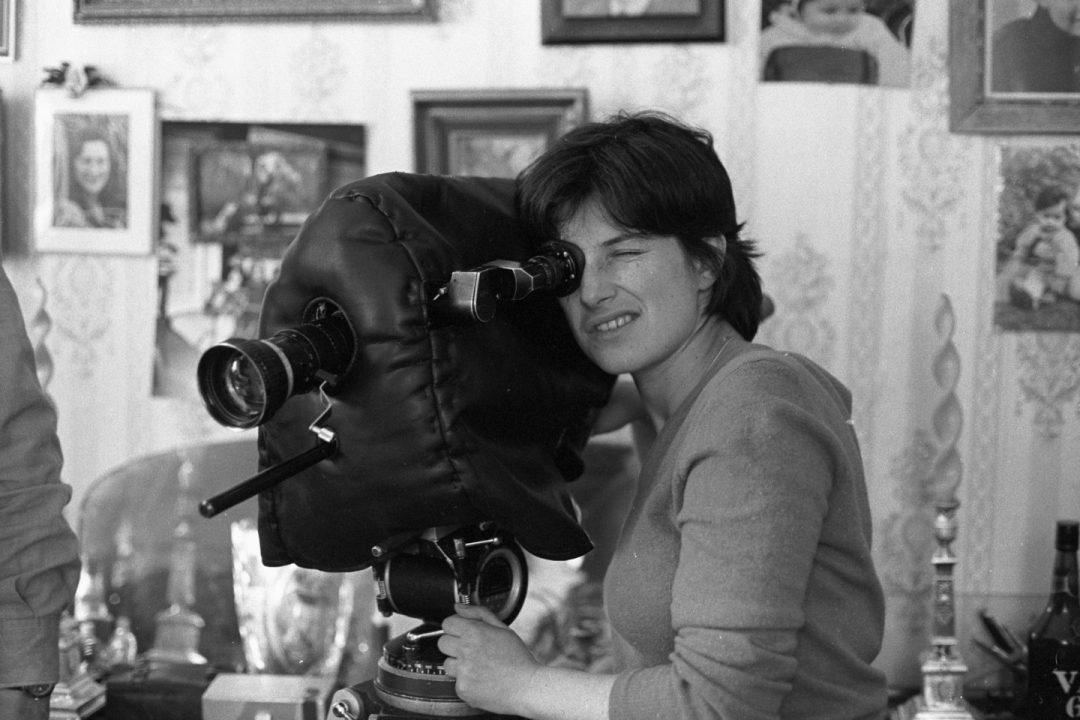 Afterlives. The title of the new English-language book on Akerman’s work, edited by Marion Schmid and Emma Wilson, is poignant, painful even, but perhaps the most fitting for this very collection. It’s been almost four years now that Chantal Akerman left us. She left an immense hole behind, an absence, which cannot (and perhaps shouldn’t) be filled by someone else. At the same time, she has left behind a magnificent collection of films, documentaries and video installations that will accompany us for a very long time to come. These works become the director’s afterlives.

If one had only one word to describe the extraordinary trajectory of Chantal Akerman, one of the great visionaries of modern cinema, it should probably be courage.

This is it. The first sentence of the book and perhaps the best first sentence of a book on a director like Akerman. Everything else is complementary. It is this word, courage, which contains everything one needs to know about the director. Making her first film as a very young woman, a teenager almost: courage. Carving out a position for herself in a male-dominated industry: courage. Defying long-established norms in cinema: courage. Living a life as a haunted second-generation Holocaust survivor: courage. Marion Schmid and Emma Wilson did an excellent job in introducing us to Akerman’s life and work, two elements that are difficult to consider as separate entities. They are, instead, deeply intertwined. Films such as Là-bas, D’Est or No Home Movie show this. But this is the result of a shift, according to the book’s editors, a shift away from a ‘cinema of bodies’ to an engagement with the subject of memory and identity. Her cinema is a cinema of (be)longing, of a constant search.

Schmid and Wilson’s introduction is thorough and sets the tone for a book, which surprised me by its approach. It would have been easy to focus on the now standard works by Akerman, but this is not the path the editors have taken. Giuliana Bruno’s Passages through Time and Space, which she wrote in memory of Akerman, is a heartfelt tribute, in which she suggests that Akerman’s work is part of our intimate fabric. Bruno speaks of the role of time and space, and about what she calls psychogeography, all of which had been central elements in the director’s films. She feels a “distant intimacy” in Akerman’s video installations, “a psychic atmosphere that transpires on the surface of things.”

Nothing cannot happen. The pain and colour of the bruise must remain.

Carol Mavor’s Moeder, Maman, Mom is a daring chapter, which is a persistent push-and-pull between memories of Akerman’s work, memories of Mavor’s mother, of the author’s first reading of Anne Frank’s journal. It’s a chapter on and of fragments, a fragmented chain of memories and associations that are fascinating and challenging at the same time. The chapter almost reads like traumatic memories, which come and go, used by Mavor whenever they appear, without a chronological order. I can only salute the editors for including this wonderful piece in their collection.

There are other chapters that struck me because they looked at elements of Akerman’s work that have so far not been in the foreground. Jeanny Chamarette contributed Ageless: Akerman’s Avatars in which she explores agelessness in the work of Akerman but also in cinema, identifying agelessness as “an ambivalent form of cinematic resistance.” I couldn’t help but think of photography, this medium that has allowed us to stop time with a single click, and, with that, to stop ageing, if only in a photograph. Chamarette writes that ageing “is something refused, denied, exchanged in an oddly permanent and strangely replaceable relation between generations of on-screen women.” For her, in particular in the context of ageing, Akerman’s is a cinema of resistance.

To smoke a cigarette, indeed, both functions as an indexing of time, or a way of measuring time passing.

Alica Blackhurst’s chapter on the display of smoking in Akerman’s work is another original contribution that I particularly liked, especially because Blackhurst connects the process of smoking to the measurement of time. In some ways, we could then argue that the cigarette becomes a haptic clock. For Blackhurst it can also be considered “a baton to apportion time; or to attenuate the act of waiting.”

What I like in Schmid and Wilson’s book is the breadth of content it offers. It is not a book about the “usual” subjects we speak about in the context of Akerman’s cinema. There is work on the director’s installations; there is work on, yes, ageing and smoking; there is work on what Albertine Fox calls “vocal landscapes”; and there is also work on Akerman’s use of light in Cyril Béghin’s excellent chapter Light out of Joint.

Overall, the book makes a valid and interesting contribution to existing writing on Chantal Akerman. This isn’t self-evident nowadays. I often feel as though publications are made for the sake of it, not in order to add something new to the field. Schmid and Wilson’s book was therefore a pleasant surprise. It makes me sad, however, that in 2019, I have to highlight the fact that this book on a women director was edited and also largely written by women. At times, it fills me with despair that we need to note this as something special, but unfortunately we haven’t quite reached a stage in academic publishing where men and women have equal chances for publication. Maybe, this is a beginning…