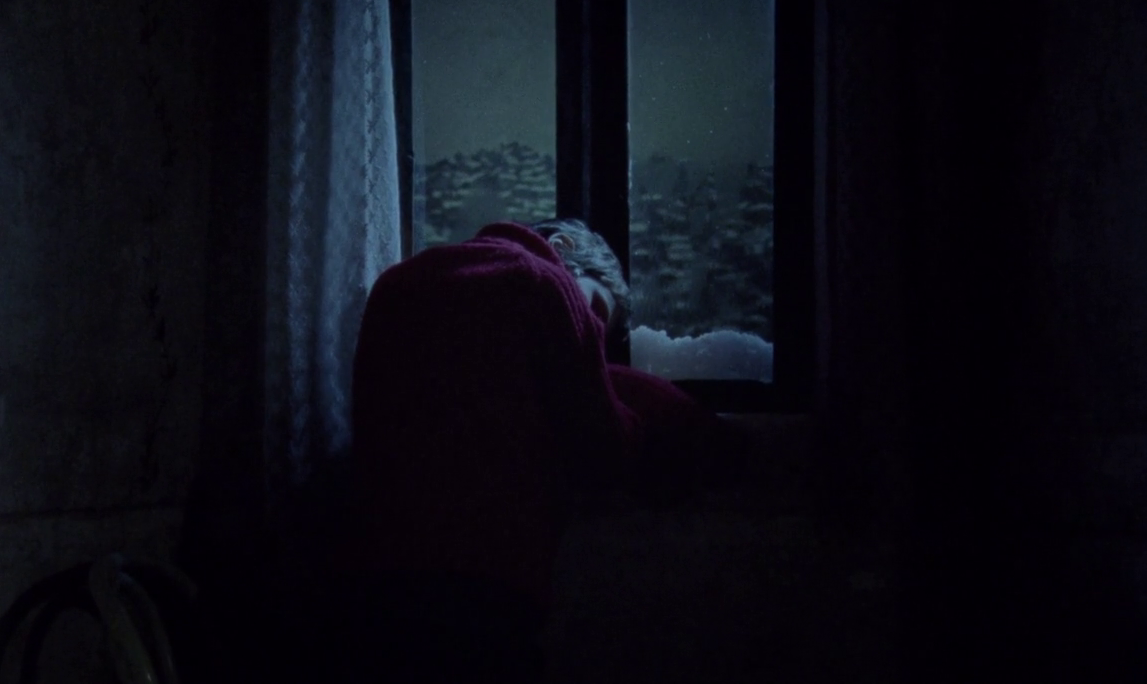 André Gil Mata’s The Tree had me thinking a lot, had me admire what I saw and had me marvel over the future of Slow Cinema. Mata is part of a growing number of new, extremely talented slow-film directors, which fills my heart with (slow) joy. What is more is that The Tree is one of those unforgettable films, which pays homage to its predecessors, a unique piece that raises its hat to major influential “slow” personalities while carving a niche for itself. The future of Slow Cinema looks bright!

The film starts with a shot of a snowy landscape. The picture is not entirely clear, it’s a bit blurred and when the camera, slowly, very slowly but beautifully, retreats, we realise that the blurry aspect comes from a steamy window, through which a young boy is looking, steaming up the window with his breath, then washing off the humidity with the sleeve of his jumper. He is cold, wrapped up in a thick jumper and thick socks. The cold is palpable in this austere flat, which he shares with his mother. There is no father, the boy’s look is longing, it is a searching look. A look that wants to find what is missing. The mother puts her arm around the boy’s shoulder, while the camera continues to retreat, ever so slowly, ever so gently, merging impressions from Béla Tarr’s Damnation and The Man from London with Andrei Tarkovsky’s The Mirror and Stalker. The scene at the beginning of Stalker, a slow camera movement through the austere flat of the Stalker who gets ready for his next journey into The Zone – I cannot think of a better homage to this than the beginning of Mata’s The Tree.

But Mata goes further. He doesn’t stop the camera. Instead, he continues alongside a wall once he left the boy’s flat behind. The wall is a connection between flats, between humans. It divides them, but also unites them in their struggle. It’s a time of war, of fear, of death, of perpetual danger. When the camera reaches the end of the wall, with its cracks, its wounds and scars, Mata shows us another flat, connects the boy to an elderly man and his dog, he too alone while bombs are falling. He lays in his bed, waiting, hibernating, trying to escape mentally from the daily turmoil of war. I don’t often go into detail about aesthetics and tend to be more keen on writing about the content of a film. But I have to highlight the exceptional camera work here, so patient, so beautiful and graceful, and so… just the camera work alone left me speechless. It felt poetic, like a poem that sought to recover lost memories, taking its time to search for traces.

Tarkovsky spoke of time-pressure in his book Sculpting in time. In Mata’s film, this time-pressure is palpable not only because of the cinematography but also because of the persistent ticking clock which reaches our ears from somewhere. Pressure – in form of time, in form of falling bombs, in form of loneliness and the longing for an end to this feeling of being alone, of being naked and exposed. The absence of speech, of even the smallest word for well over an hour, adds to the weight of the film. When the man gets up in order to leave the house, one cannot help but ask why. Why expose yourself to the dangers that lurk outside in a landscape ravaged by war? Is there a place to go at all? The man picks up an empty glass bottle and attaches it to a stick, which he will carry on his shoulders for the following forty minutes of screen time. The man’s struggles in the snow and ice, making his way from one place to another in order to pick up other bottles, his long, painstaking way to a water source – of this, the feeling of time remains in my bones.

As well as the sound of a dog walking in the snow. Sound is essential in The Tree. Mata shows that film is not only a visual medium, even though it is often talked about in this way. Sound brings atmosphere, brings weight. The dog is, because of the darkness of the film, not always visible. But he is there nevertheless, always around, sniffing, walking, checking on his master. We can hear him. We can hear his absent presence. The man’s way is long, often we hear only the sound of the empty glass bottles clashing against one another. Sound orientates us in the darkness of the night, our ears become a stretched-out hand which helps us to feel our way around a dark room. Mata wants us to struggle, but he also gives us a hand.

What happened to the boy? With the opening shot, which suggested a link between the boy and the man, there is a lingering question that becomes the stronger the more time we spend with the man in the dark of the night. When the man gets off a boat, which he took in order to reach the water source, the camera, for the first time in the film, detaches itself from him, roams around independently and begins to weave a seamless net of past and present. There are no boundaries, there is no clear cut distinction between the two. Everything is one. Everything is time. It is this formidable Tarkovskian net, which brings the man and the boy together.

And this is where I need to stop. Abruptly perhaps. Yet I feel that everything above is already a spoiler for a film that must be felt and this post feels wrong in that whatever I write it cannot bring across Mata’s magnificent work.