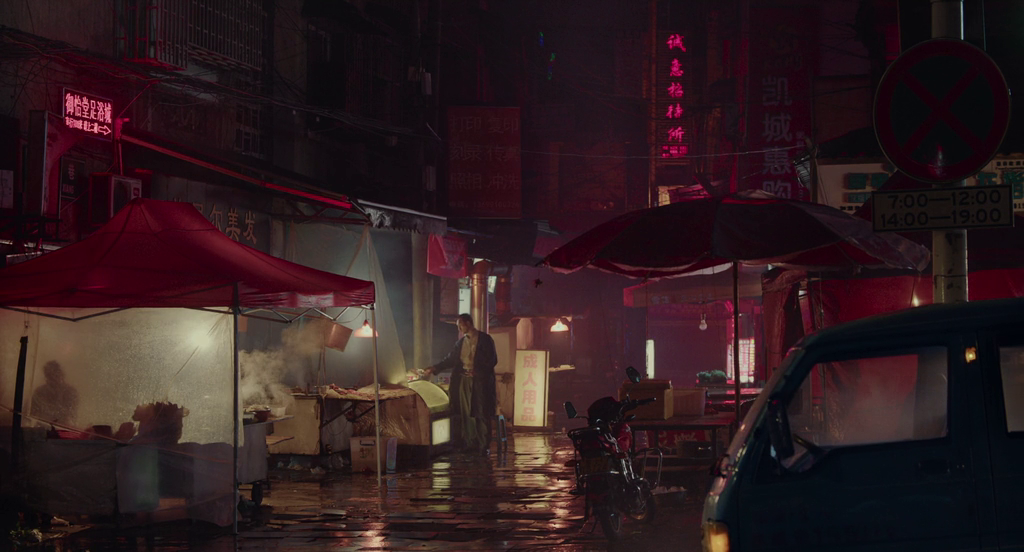 It has something bizarre to it. Seeing a film by Bi Gan, which defies any temporal and spatial orientation in the middle of a disorienting world situation, is both fascinating and scary. I was hoping that a night’s sleep would allow me to process the film, but this is not what happened. On the contrary. I feel even more like floating, even more lost, even more as if wrapped in a satin cloth that gives me warmth and comfort, but which, at the same time, doesn’t let me go.

What are time and space? What is memory? Film, by its very nature, is questioning what we think we know. Film can jolt us into awareness, but it can also cloud our thinking. With Kaili Blues, his debut feature, Bi Gan already showed that he could take his audience on a fascinating, disorienting journey through time and space. Always moving, always circling, always following – until we have lost all sense of where we are. A sense of who we are.

Kaili Blues started with an extract of the Diamond Sutra.

It is impossible to retain a past thought, to seize a future thought, and even to hold onto a present thought.

I wouldn’t have thought that the follow-up to Kaili Blues would illustrate this part of the Sutra better than the film it had originally introduced.

It is impossible to hold onto a present thought.

It is impossible to hold onto the present, because there is no present. Nothing is present. Everything is past the moment it is. Everything else is already what will be.

When we walk through the streets of Kaili City, it feels like an uncanny memory. I have been here before, I tell myself. I have been here before. I have been in this very city, in this very street. I have seen this very glass drop off the edge of the table. I have seen people taking a journey into and out of a desolate place. But it wasn’t in Kaili City. It wasn’t in 2018 (or 2020). It was in the world of Tarkovsky’s Stalker. Bi Gan freely mixes and merges, transforms worlds, spaces and times. You are never quite sure where you are, and what it is that you are traversing. A dream? A memory? Is it a visual manifestation of a long-held desire?

Kaili City becomes a maze, almost like an attraction park whose rollercoaster takes you through childhood experiences. But something is different. Bi Gan’s rollercoaster is not so much going up and down, jolting you into speed only to slow you down again. No, Bi Gan’s journey has but one direction; deeper and deeper into the soul, our soul, the soul of film. The city, which we know so well from Kaili Blues becomes a medium through which the unconscious speaks. But whose unconscious?

There is the unconscious of Andrei Tarkovksy.

There is the unconscious of In the mood for love.

There is a multitude of unconscious desires which add to our own.

This glass which slowly moves towards the edge of the table because of the rumbling of a train.

This lamp which illuminates a dark run-down room, trying to bring a bit of light into a sombre atmosphere.

“And once you’re dreaming, it’s an out-of-body experience,” says detective Luo Hongwu, a haunted man whose journey we share. Some dreams are so realistic that we can feel them, taste them, be frightened by them. You reach out your arm and touch the person who is walking away from you. The colours are vibrant, vivid. There is a warmth to the images, to the voices.

Bi Gan bursts the bubble of dreams, memories and, perhaps, even hallucinations without letting us go. Our journey, and that of Luo Hongwu, is indelibly connected to film. What we see is true and false at the same time.

Truth and lies no longer have any meaning.

Nothing has meaning anymore. Only the journey itself is meaningful. What Bi Gan created is not rational, but spiritual; not comprehensible, but experiential. An out-of-body experience which I can only compare to one of the most intense shamanic journeys I have had so far.

Long Day’s Journey Into Night is like a black hole which sucks you in, only to leave you empty and disoriented. Returning to what we call reality is difficult. Once we land back on our feet, something hs changed. Something has been altered.

And this something is us.