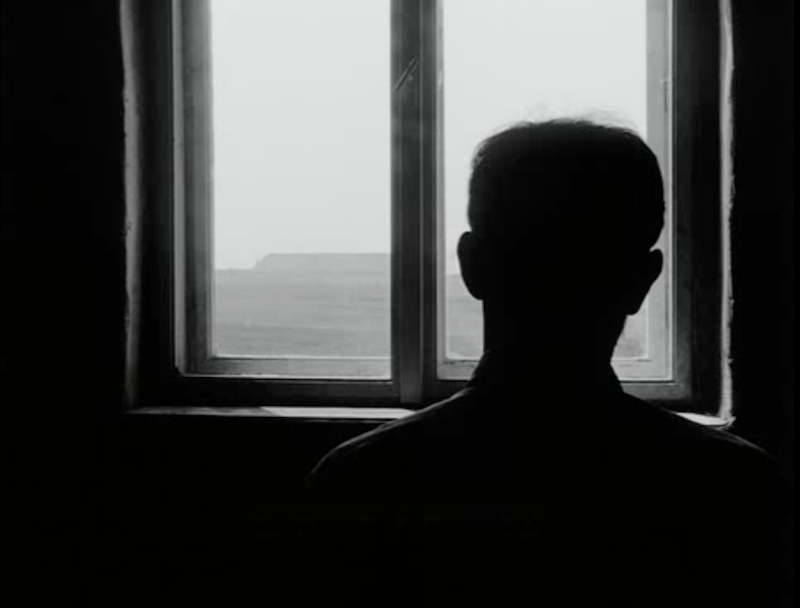 It’s slowly coming together, the first print issue of The Art(s) of Slow Cinema. The design is ready (for now), and I have put work on the journal aside for now to allow me some breathing space. If you keep looking at the same thing all the time, you no longer see whether or not something looks good. I want to return to the draft with a fresh pair of eyes by the end of the week and start the final round of proof-reading. This means that we’re getting closer to the day when you can (finally!) pre-order the magazine. And why not give you a sneak peek at what is to come? Let me introduce…. *drumroll*

The wonderful Sebastian Eklund from Sweden, one of the most talented artists I know, has adapted the poster for his new film The Tide Brings the Birds Underwater (streaming for free on tao films) in order for it to fit the cover of the journal. It’s beautiful and expresses everything that Slow Cinema is for me. Obscurity, dreams, mind images, imagination…I cannot thank Sebastian enough for this. I hope it will look just as good in print! 🙂

The journal contains seven articles, responses, and/or creative works. Daniel Fawcett and Clara Pais from The Underground Film Studio contributed their engaging 21 Reflections on Creativity and Cinema in the 21st Century, which takes a look at the meaning of both at a time when digital images are omnipresent. A taster? Here you go:

The daily work of the artist is to develop a craft. Seek to have the widest possible creative tools available in order to best serve the images that need to materialise through you. Work on cinema and let cinema work on you; artistry and craft are ways of being.

I’m particularly happy that filmmaker and writer Maximilian Le Cain has agreed to write a response to Daniel’s and Clara’s propositions. All three belong to an active group of experimental filmmakers whose output is simply fascinating.

Watching is as personal and creative as making. This understanding rips the foundations out from under the traditional hierarchical power relations implicit in the producer/consumer dynamic. The question they pose of “how can a film fail when its only goal is to come into existence?” neatly emasculates over a century of puffing and panting efforts to overawe audiences with bigger, better, louder, more Olympian products.

And we continue with filmmakers speaking about their work and the meaning of cinema, time, and duration. There is Aleksandra Niemczyk, whose breathtaking film Centaur runs on tao films at the moment. Her Thoughts on Centaur are a view behind-the-scenes of making a film that is both personal, and yet universal. A visual beauty which impressed me the first time I saw it.

In a photo, stillness is pregnant with movement. The photographer brings the stillness, and the viewer must project the movement. In a film, stillness frames a scene, while movement is giving information, telling, bringing emotion. Stillness is observing and giving time to see and breathe the point of the frame.

What is the link between film and boredom? Why is it that some people get bored by films and others do not? Sebastian Cordes, director of A Place Called Lloyd (available on tao films), investigates the subject of boredom in cinema, merging his experiences as a filmmaker on set of Lloyd and theoretical reading.

To know nothing is, precisely, the child’s position. The poet, the philosophers position. This was our position in Bolivia. Anti-journalism. To embrace, to dwell, to plunge into a space for a while. This takes time. As it is said before, boredom is linguistically connected to time as well. Phenomenologically speaking, boredom is the state of being such that one’s time feels lengthened.

But Slow Cinema is not only about time. It is also about themes that find less exposure in other, more popular films. Their vertical development, i.e. their in-depth exploration of themes as opposed to a horizontal progression of a narrative by all means, allows us to get closer to a burning topic that are the heart of some people’s lives. Caitlin Meredith, the voice behind Her Head In Films podcast, writes about Yulene Olaizola’s Fogo:

Olaizola’s focus on the mundane also shows how these men are embedded in Fogo Island. We begin to understand why they cannot leave. They are so enmeshed in the environment–so attached to the land, the wind, and the water–that evacuating is, in some sense, death. It’s a death of the soul, of the spirit. By refusing to leave, they are resisting this death.

And one thing is sure: as Caitlin points out, at the heart of Fogo is the theme of loss, of death. This is also the case with Lav Diaz’s oeuvre, which I have explored for the Brazilian film magazine multiplot!, available online.

Slow Cinema has often been talked about in the context of temps mort, or dead time. After an action has come to an end, frames remain empty for several seconds, which tests the patience of the viewer. Lav Diaz’s films are no different, but his use of long duration and dead time takes on another dimension. He creates something that I call death time. Death always comes slowly in his films. It takes its time, and it’s not so much about dead time in Diaz’s films but about the slow descent into madness with death being a refuge for the persecuted.

The journal is a complementary resource to the website you have come to love over the years. There is one secret, which I’m not willing to give away yet, and maybe I never will. But let me say one thing: I have invited filmmaker and artist John Clang to contribute, and his work is so gorgeous that I don’t think I will give it away before at least the pre-sale!

The only thing you need to do now is wait. Which is what I do, too. Good things come slowly, and I’m not too far off the pre-sale. I’m just taking my time to make sure that it’s all good and that I can ship the baby without getting a bad conscience!

In the meantime, if you missed this announcement, you can now support me not only via Patreon and a monthly contribution. You can also buy me a virtual coffee via Ko-Fi. I love coffee when I write for you! 🙂