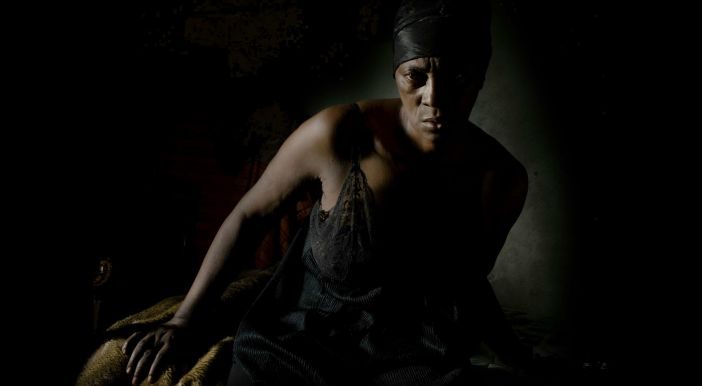 It is difficult, if not impossible, to think of a woman in film, who has such a magical, such an overpowering aura around her as does Pedro Costa’s Vitalina Varela. The minute she appears, stepping out of an airplane, arriving from Cap Verde with the help of a ticket which she had waited for forty years, Costa’s film changes. Or perhaps, I have changed after the first thirteen minutes, after seeing men, silent in their grief, returning to their makeshift homes, alone, away from people’s sight, back into the darkness of their lives, back to their underground life, after the burial of Joaquim, bricklayer fom Cap Verde. A man like them, a man who struggled with his existence in a country which never really became his, which never offered him what he was looking for.

Once Vitalina arrives in the banlieu where immigrants live, or rather survive, in their own small world, she takes on a presence that is difficult to shake off. Even many hours after having seen the film, her face, her body, her body language – everything is still as present in my head as if I have just finished seeing the film. After two hours of on-screen time, Vitalina has become part of my life, part of how I see the world, but also part of how I see cinema.

Costa’s previous film, Horse Money (2014), was a painful piece on memory, trauma and loss. Can we ever forget Ventura’s erring through a labyrinth of hallways? Can we ever forget that scene in the lift, in which Ventura stands next to a soldier, a memory from the past, a menacing reminder of what has been? Horse Money was a disorienting piece, an uncomfortable piece because it not only showed suffering, it made it palpable. Where does Vitalina Varela stand?

Vitalina is, perhaps, an out-of-body experience. It felt as though I was watching something that happened to me, even though the actual story that the film depicts is far removed from my own life. And yet, what Vitalina shows is a human story and as long as one is truly human, one feels the film, one feels Vitalina’s grief, her anger, her frustration, albeit muted. Vitalina’s story does happen to me, because I, too, am human. Therefore I see myself in shadowy alleyways, in dark corners of make-shift houses. I see myself caring for those around me. Perhaps, I become one of the spirits which Ventura, as priest, speaks about when he tells Vitalina that she could speak to Joaquim if she were to learn Portuguese. The spirits speak only Portuguese…

Maybe I was a shadow during the film, a shadow that encircles and traps Costa’s characters. I couldn’t help but think of Japanese shadow plays, I couldn’t help but think of the importance of shadows in ancient art forms. More so than in Horse Money, Costa creates a striking darkness, a profound black that seeks to be pierced by those who traverse it. “We’re born of the shadows”, Ventura says. It is not the light which gives birth, it is the shadow, the darkness. It isn’t hope, it is despair and disorientation. And Costa shows that we can never really shake off those shadows. They remain, they follow us, regardless of where we go.

In Vitalina, the Cap Verdean migrants, united in their solitude and their suffering, are often shown in a bright artificial light, which may remind one of lighting on a theatre stage. Or on an opera stage, with all focus being on the one tragic figure in the centre of the stage. It is difficult to ignore the resemblance, it is difficult not to see what Costa tries to do: puts the spotlight on those who survive on the margins, who survive without us even noticing that they are there. At the same time, one needs to ask: what is real? What has really happened, what is really happening? Vitalina is, in this context, as disorienting as is Horse Money. There are present moments, there are past moments. There is an in-between which the viewer needs to negotiate.

It’s this in-between which I find to be the main subject of the film, this liminal space. In between countries, in between cultures, languages, people. In between family and solitude. Liminal, marginal. No one tells Vitalina how her husband died. She wonders whether it was suicide but she will forever be tormented by not knowing. Forty hears have passed since Joaquim left. For people at the margins, forty years can be a lifetime. Vitalina carries her anger, the anger which she had carried for forty years, and finds a place to express it in Joaquim’s house.

One wouldn’t call it a home.

In her monologues, we get to know her man, the man who left without notice, who had affairs and whom she couldn’t reach anymore once he ‘ran away’, as she says. They had built a house together, in Cap Verde, far away from the misery she now finds herself in. A beautiful house. Day and night they worked on it. They used to be someone, they belonged somewhere. Selling a calf was enough to buy a lot of raw material for the house. A life so different. A life where light prevailed and the shadows stayed at the margins. Joaquim traded the light for the shadows and Vitalina, too, had to live with the shadows which Joaquim brought over her life.

“Your death can’t erase all the evil you have done,” Vitalina says. Regardless, Joaquim is one of the lucky ones. His wife gives him a face, tells his story, makes him human for those who had never known him. Makes him human for us. Many others fall into oblivion. On their graves, mere numbers. No name, no date of birth, no date of death. Numbers. They will eventually become errant souls, looking for just recognition of them as humans, of their stories as part of a grander picture of human life, of the human condition they way we are living it right now. These errant souls will return, possibly in one of Costa’s next films, or maybe in our day-to-day lives when we begin to realise that shadows are taking over.